Sometimes we can find inspiring people who take somewhat alternative decisions close by, not all of them reside in the beaches and jungles far away. One of them can be found in my hometown in Finland. He is Pasi Pekkola, a published author who is in his “third career path”, leading a creative life of a writer. Before pursuing his childhood dream, he was a professional athlete and a business leader in China.

Pasi is an old friend from my hometown, Lahti, and a great example of a person who has always wanted to do his own thing. His path is not the most typical one, but it’s certainly an interesting one. He was a professional basketball player for years while also doing his master’s degree in communications at the University of Helsinki. After the athlete career, he took a deep dive into doing business in China. He has tried different ways of living and working, always enjoying the adventure.

Today, Pasi has been a published author for eight years and his fourth novel (Kaikki isäni naiset, published by Otava) came out just last fall. He’s not advertising it, but he still does some corporate consulting gigs between the book projects as his China-knowledge is in high demand. It’s not necessarily an easy job to combine artistic and business careers. There are still plenty of narrow-minded ideas in society about how a real artist should be like. And some might think that a real artist can’t be a businessman at the same time.

“I guess I also have this image in my head, how an artist should be like. I break the image myself, but at the same time, I struggle with it. I cannot separate the artist from the other sides of me”, Pasi says.

I think the versatility that Pasi represents is magnificent. People should be able to be whatever they want to be. And do what they like doing. The stamps we put on people can end up serving as unnecessary limitations. If we aim to evolve and grow as people and pursue authentic lives, we need to step beyond stamps and socially constructed boxes. 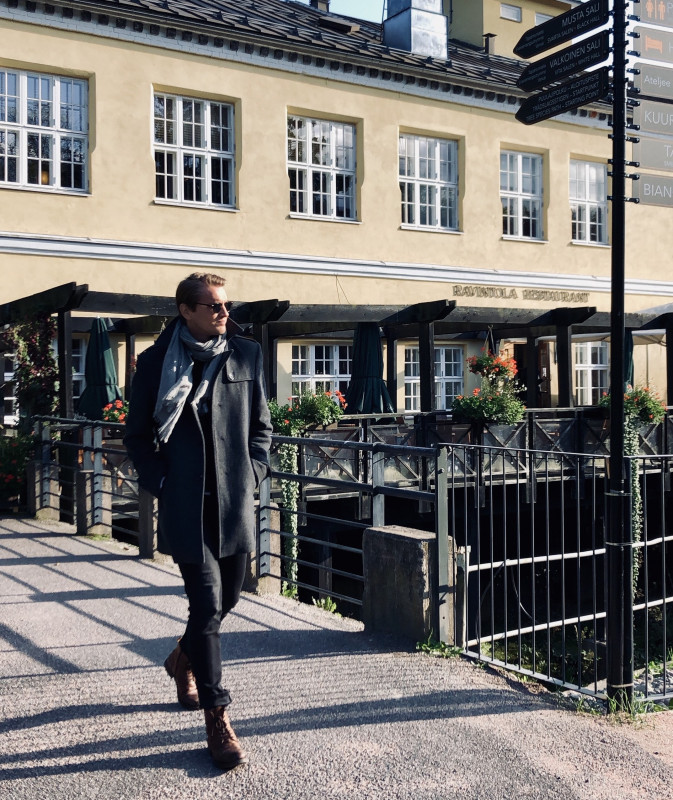 Writing has been part of Pasi’s life from the early days of his life. When he was 10 years old, he started his first “humble” project. He had read the Lord of the Rings and was a bit upset about the ending. So, he decided to jump into Tolkien’s pants and started writing a second part for the piece. With an ambitious storyline, of course.

However, the breakthrough had to wait a bit more. Pasi became a professional basketball player, and the athlete world took over. But he never abandoned writing. During his athlete years, he wrote stories to a friend, who was sort of a pen pal and someone who didn’t have anything to do with the masculine sports scene. Throughout his life, writing has been a way for Pasi to access different worlds.

While Pasi has been writing most of his life, the path to become a published author has required work, practise and resilience. It’s been trial and error and also a regular wrestle with self-doubt and the inner critique.

During his final basketball season, he started working with a book script that he finally had faith in. He was about to move to China soon to start his international business adventures but managed to send the script to a publisher just before leaving the country with his family. After only a couple of months in China, the publisher got back to him. These days, it’s not so common to find authors from the pile of scripts, but Pasi was one of the lucky ones.

From a corporate leader to an artist

Creating art and driving business in China wasn’t an easy combination. Pasi managed to wrap up his first novel (Unelmansieppaaja) during his time in Shanghai, but it wasn’t possible to pursue a real writing career when he was working long days and travelling 100 days a year.

In spring 2014, after three years in China, Pasi moved back to Finland with his family and left the corporate career and the steady pay-check. It was time to try his wings as a writer. And the timing was good. He had collected highly valuable experience in China and was able to have a part-time consulting business on the side. As the reality is, artists rarely make a big bucks, yet, like everybody else they need to be able to provide for their families. So, in many ways, the consulting projects have been a great enabler for Pasi to pursue his dreams as a writer.

However, the combination of an artist and a business consultant is challenging also from the perspective of time. Sometimes the business projects bring nice change and much-needed breaks to the creative process. But it’s important to know oneself to be able to use the time wisely. And sometimes things don’t go as planned because writing for Pasi is still a great mystery. You never know when you get into the flow.

“Sometimes I don’t get anything done in two months. I sit in front of the laptop, I think, and I try to write. But it might all just end up in a garbage bin. I like to think that it’s part of the process. If I’d measure my progress in the number of pages I’m producing, I would have had to fire myself many times”, Pasi laughs.

Creating art, for most, is not a straight-forward process where you just perform and try to be as efficient as you can. I don’t think we can force inspiration. And great things are rarely born by forcing. For Pasi, inspiration can come from anywhere: music, news, movies or good discussions. He says that it’s important to stay open and be curious. It’s also important to listen to yourself.

It’s a unique sensation to feel inspired and be moved by something. When we start creating something from our own inspiration and the realizations followed by the process, it’s possible to bring that sensation forward and inspire others.

Dreams keep us evolving, which is why they always escape a bit further

What success means for Pasi is that he has written a novel that he is satisfied with. Getting his own approval first is the most important indicator for him. Then there are other ways of measuring success. These indicators often come from the outside, like how the audience or critics receives the book. Of course, this is important for the author as well, but measuring art is much more complicated than measuring sports performance or corporate KPI’s.

“Literature is brought to life in the hands of the audience. Often the book is meant to open a discussion, and the readers find meanings in the text based on their own context. A good book creates contradictory feelings. Some might think it’s wonderful, and some can get furious. That’s what art is supposed to do, create contradictory feelings”, Pasi thinks.

Productivity is also something that we are obsessed with these days, and the art world is not excluded from this prevailing religion. Pasi told me that his creative process is often long, and sometimes it takes months before he finds the flow in writing. But he seems to be quite fine with that. It’s secondary for him how much and often he can publish material. More important is that he publishes something that he personally thinks is good.

I really like that. Our success or value shouldn’t be measured based on our productivity. Quantity and quality might sometimes walk hand in hand, but I’ve seen quantity evaluated over quality too often. Sometimes less can be more.

I think that success can be as simple as being able to work with things you are passionate about. And this is the lucky situation with Pasi. But what also came up in discussion with him is that having a dream job is not only about flow and inspiration. Love-relationship with writing takes as much as it gives. Sometimes writing gets sticky, and it causes frustration. Not to mention the ruthless inner critique he has to deal with.

So, doing what you love is not only about fireworks and joyride. Negative feelings are part of a dream job, just as they are a fundamental part of being a human.

Pasi admits that he is living a dream, kind of. But in his world, dreams always tend to escape a bit further, like in his books too. Pasi thinks that it’s impossible to reach dreams in the form we imagine them. For example, working as an author has been different than he imagined. In many ways, even better, but also much more difficult than he anticipated.

“That’s how it should be; dreams take you forward, sometimes sideways. But you always take some direction. The fact that the dream might escape a bit further might not be a bad thing. Our dreams are never completed, and we are never completed”, Pasi reflects. 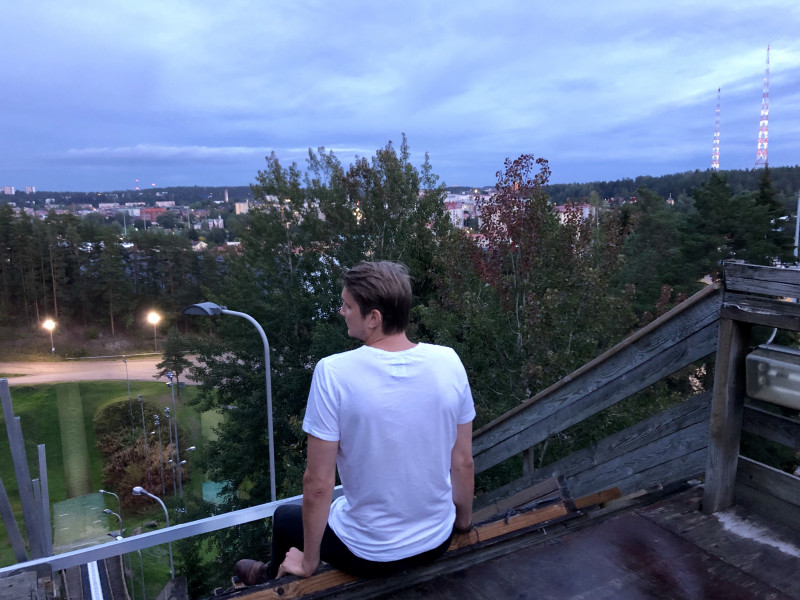 When I ask Pasi to give tips to people who are looking for their calling or mission, he states in a humble Finnish manner that he’s not the right person to give anyone advice. He claims that he is still figuring out his own path. But he agrees to share some of his thoughts anyway.

A gut feeling is something he suggests to start with. It’s important to recognize things you find interesting. You should then give yourself a permission to try those things to gain more information if this would be the path you would like to take. You can’t know if you don’t try. Pasi also thinks that it’s always easier to take steps back than to take leaps forward. So maybe don’t burn bridges when trying new things.

Courage and mercy are also useful qualities in the journey.  We need courage to try new things. Sometimes we might fail; that’s when we need mercy. Time is also important. We can’t invade new arenas without having time for it. In his creative work, Pasi has also practised tolerating insecurity and letting go of control. The work of an artist is unpredictable and mysterious. He has accepted that.

I think what Pasi has done in his life is very inspiring, and he is living proof that there can be several fulfilling paths in life. We all have many interests and talents, and that’s why also many potential ways of making a living. The key is to get in touch with our own desires and find ways of piloting different paths. Life is rarely a straight highway to our goals; we need to pivot and adjust as we go and gather more insights. And that’s the beauty of it. Not being sure what’s behind the corner.